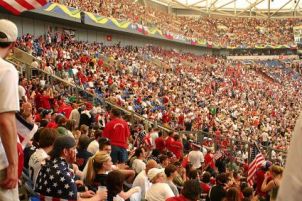 The World Cup opening ceremony began at 2:00 p.m local time from the amazing Orlando Stadium in Soweto, Johannesburg with a duration time of 32 minutes.

The ceremony started with a beautiful parade followed with the live performances of South African impressive performers that put the audience on their feet and dancing in no time.

Among those spectators that were shown was super model Nomi Campbell, Jacob Zuma (South Africa’s President, Felipe Calderon (Mexico’s president), Joe Biden (U.S Vice president) as well as Nobel laureate Desmond Tutu who like any other person couldn’t resist the joy and happiness the South Africans brought with their dances, music and beautiful and kind people.

The presentation of the 32 countries participating was well organized and I am talking not actual team in the field, but how they announced the countries and their names with color placards that will join to form names that could be seen from the air along with the voices of children that screamed the name of each country as they spelled it with the color placards.

Orlando Stadium has a capacity of over 90,000 seats which weren’t fully occupied when the Opening ceremony started, some were stuck in traffic, but the ones that were inside enjoyed the colorful and musical festivities from South Africa.

As you know one of South Africa’s most important personality Nelson Mandela wasn’t at the World Cup open Ceremony after the tragic news of his great grand daughter’s death, his grandson said he would be there for a short period of time, while then it was reported that his grandson confirmed he would not attend.

After the parade ended and the music was silent, the voices of millions of fans, with horns were heard along with the final fireworks that put a closure to the 2010 World cup open ceremony, from the beautiful country of South Africa.

Rooney : There Is Nothing To Be Afraid Of!