Chile ended their 99-year wait for a Copa America title by beating Argentina 4-1 on penalties to win the tournament on home soil in Santiago. 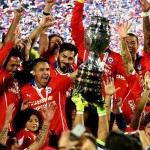 Jorge Sampaoli’s side denied Lionel Messi his first international honour by edging out La Albiceleste in the shootout, having dominated much of the contest in regular and extra time – despite failing to create much in the way of goalscoring opportunities.

However, Gonzalo Higuain passed up a golden chance to claim victory for Argentina in stoppage time after 90 minutes – sending a tame shot from a tight angle into the side netting with the goal gaping.

And the Napoli forward proved the villain in extra-time too, blazing Argentina’s second kick high over the bar to give Chile the advantage – which La Roja, having finally earned it, never relinquished,.

Ever Banega also missed in the shootout, with Messi the only Albiceleste player to find the net from the spot. Chile’s penalty kicks were flawless, and Alexis Sanchez delivered the decisive blow, clipping the ball coolly down the centre to spark wild celebrations in the host nation.