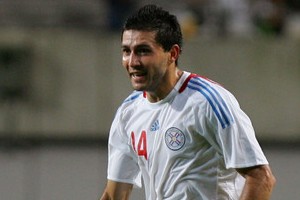 The 27-year-old central defender, who has been selected for Paraguay’s initial World Cup squad, started his career in South America with Racing Club in Argentina before joining Fiorentina.

He moved on to Beira Mar and then Bruges, who came second in the Belgian League behind Anderlecht this season.

The fee is undisclosed and Wigan boss Robert Martinez told the club’s official website: “We are thrilled to have been able to capture a player of calibre of Antolin.

“I think everyone will realise what a quality player he is when we see him at the World Cup for Paraguay.

“He is a highly versatile defender with great awareness and distribution and has great pride in keeping clean sheets.

“He is entering the best period of his career and is looking forward to adding to his international and European experience, as well as playing for his country in the World Cup.”


Petrov : We Must Be More Clinical Next Season!