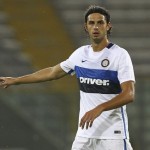 Reports have emerged claiming that Liverpool have joined the battle for Inter Milan defender Andrea Ranocchia.

Sky Italia reported that Liverpool have asked for Ranocchia after learning he had turned down Norwich City.

While the Italy international was not prepared to go to Norwich, he could be swayed by a Premier League experience at Jurgen Klopp’s giants.

Sampdoria are also said to be interested if Ranocchia is included as part of an exchange for Eder.

Norwich have had a €10 million offer for the defender turned down.