Reports are out claiming that Liverpool are preparing a ‘monster’ bid for Anderlecht midfielder Dennis Praet. 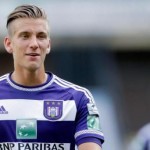 BILD reported that the young Belgian is a January market priority for Reds boss Jurgen Klopp, who wanted to sign Praet previously for Borussia Dortmund.

Klopp has given the green light for a €30 million offer to be made for Praet.

Belgian sources say Anderlecht are aware of Liverpool’s interest, but are yet to field any Reds offer.

Praet, 21, won the Belgian Golden Boot in 2014 and is also wanted by Arsenal.