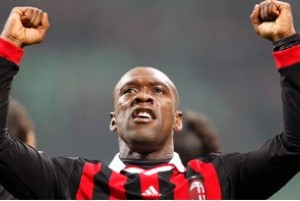 Substitute Clarence Seedorf scored a stoppage-time winner to lift AC Milan to victory over Chievo at the San Siro on Sunday night.

The Dutch midfielder entered the game with 11 minutes remaining and knocked in the only goal of the match to pull the Rossoneri to within one point of leaders Inter Milan.

But the contest was marred by an injury to David Beckham, who went off in the latter stages after Milan had used all three substitutes with an apparent Achilles tendon injury.

The result is just what Milan fans needed after their elimination from the Champions League in midweek at Manchester United.