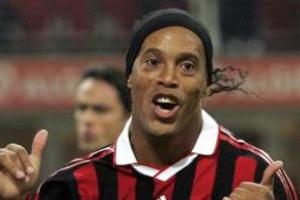 Milan came from a goal down as Ronaldinho starred in a 2-1 Serie A win over Roma at the San Siro.

The Brazilian playmaker scored a penalty and created Alexandre Pato’s winner as the Rossoneri overcame Jeremy Menez’s early goal to hand Claudio Ranieri his first defeat in charge of the capital club.

Menez capitalised on a defensive error to put the visitors ahead but an inspired second-half performance from Milan helped them leapfrog Roma into the top half of the table.

With new coach Leonardo, Milan have been struggling in lower-mid table and they got off to a dreadful start when Thiago Silva, returning from injury, fluffed a straightforward clearance to let Menez in to finish under Dida.