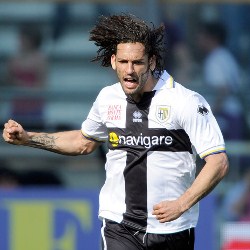 Interesting news are out and it has been revealed that AC Milan are in contact with Juventus over a price for Amauri.

The Turin giants are expected to cash in on the 31 year old this summer, with the centre-forward not in the plans of new coach Antonio Conte.

Amauri revived his career on-loan at Parma last season and Milan coach Max Allegri sees him as cover for No1 striker Zlatan Ibrahimovic.

Corriere dello Sport says Amauri is aware of Milan’s interest and keen on the move.

His agent, Enzo Bronzetti, has close ties to the Rossoneri, which should smooth negotiations.

Galliani : AC Milan Does Not Need To Sell Any Stars