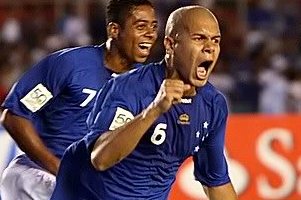 Interesting transfer news are out and it has been reported that Italian giants AC Milan are tracking Cruzeiro midfielder Fernandinho.

Local Italian newspapers have reported that the 28 year-old can play in midfield and defence and is emerging as a January target for Milan.

It is also believed that AC Milan coach Leonardo likes Fernandinho’s versatility and would use him as cover for midfield and in defence.

Leonardo is also confident that Fernandinho would settle quickly at AC Milan as there are other Brazilians such as Ronaldinho, Alexandre Pato and Thiago Silva.


Leonardo Reveals That He Has Faith In Dida