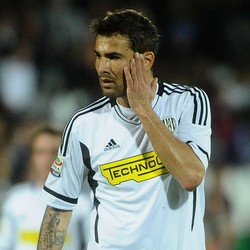 Reports are out claiming that AC Milan are weighing up a surprise move for Cesena striker Adrian Mutu.

The former Chelsea, Parma, Juventus and Fiorentina man is looking for a move after Cesena slipped down into Serie B.

According to Corriere dello Sport, Milan have prepared a bid for Mutu, 33, to join them at San Siro.