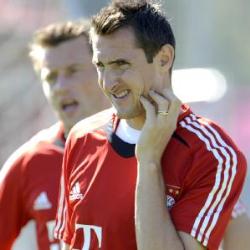 Transfer news from the Italian Serie A is out and it has been revealed that AC Milan are planning a double raid on Bayern Munich.

The newly crowned Italian champions are reportedly seeking two main figures on the transfer market this summer – a left-sided midfielder and an understudy to Zlatan Ibrahimovic.

According to Tuttosport Milan have already opened talks with Bayern for Bastian Schweinsteiger and Miroslav Klose.

Schweinsteiger would reunite with his former Bayern Munich teammate Mark Van Bommel, who arrived at San Siro in January.

In Klose’s case, it is said that the veteran striker can be signed up on a Bosman.

There is a very strong rapport between the two clubs, so negotiations could progress fairly quickly.