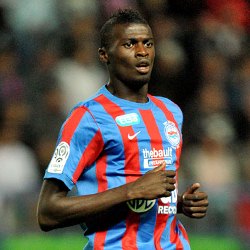 Reports are out claiming that Manchester City and Arsenal are struggling to convince M’Baye Niang about a move to England.

The 17 year old Caen starlet is wanted by both Premier League clubs, but Italian sources say he’s on the brink of signing for AC Milan.

Sky Italia says Milan are this week in talks with his agent, Oscar Damiani, about a deal, though City and Arsenal are also keeping their hand in.