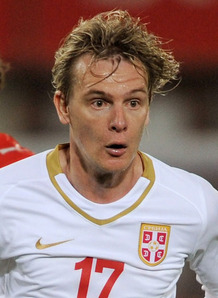 Italian giants AC Milan have been reported to be set to clinch a deal for CSKA Moscow winger Milos Krasic.

Russian sources say an agreement has already been struck between the clubs which will see the Serbia international move to Milan in January.

It is believed that AC Milan are set to sign Krasic for £10 million and he will move to the San Siro to replace youngster Ignazio Abate in Leonardo’s midfield.

It is said that Rossoneri chief Ariedo Braida recommended to the board they push through the deal after seeing Krasic in action against France on September 10.


Team USA Has A Lot To Learn, Says Landon Donovan