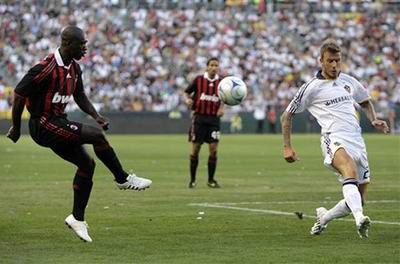 New signing and Milan defender Thiago Silva was first to put Milan in the score sheet. Beckham then replied by providing a field-length cross to Landon Donovan, who set up Alan Gordon for the equaliser in the 29th minute.
Veteran striker Filippo Inzaghi put the Milan ahead again in the 61st minute only for Bryan Jordan to connect on a Beckham corner in the 65th minute and equalise at 2-2.
After assisting with the second goal, David Beckham turned in the direction of the stadium that had been the most vitriolic and simply shrugged his shoulders. He was substituted with 15 minutes left to play.