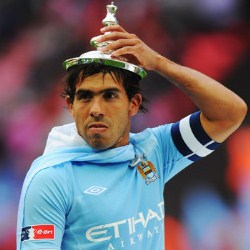 The Argentine international striker has once again been linked to a move away from Eastlands this summer, despite winning the FA Cup and qualifying for the Champions League next season.

However Johnson is desperate for City’s skipper to lead to stick by City heading into next campaign.

The England international said : “He carries us sometimes with his goals and his drive,”.

“He is probably the best player I have played with.

“Some of the goals and some of the stuff he does in training is just unbelievable. Personally I hope we keep hold of him just like all the City fans do, because he will be a major part next season when we are playing in the Champions League”

“He would be hard to replace and there’s probably only five or six strikers out there who get you that many goals a season at the highest level.

“We have one of them, so it would be great if we could keep him,” he said.

The reality is that Tevez’s future remains a mystery as the want-away skipper remains silent about his plans for next season.

“He does not really say much, he is quite quiet,” Johnson said.

“His English isn’t too good. He keeps himself to himself mostly and does his talking on the pitch. That’s what I like about him.”

After a campaign that landed the club’s first silverware in 35 years, Johnson believes City’s cross-town rivals Manchester United are now within The Blues’ reach. 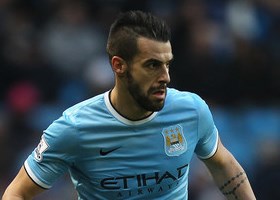 Man City has Not Improved at All Since Last Season – Wenger