Adam Johnson : I Am Happy At Manchester City! 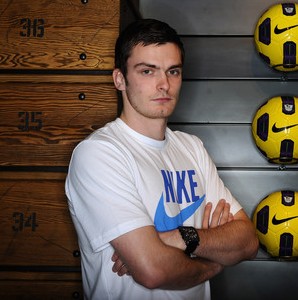 After admitting that he is ready to quit the club, Manchester City winger Adam Johnson has sensationally admitted that he now plans to remain at Eastlands club for long-term.

Johnson who left Championship side Middlesbrough to join City has recently expressed his frustration with life as a substitute and that he would “definitely consider” his options if he was not a first-team regular.

However, he has now said those comments were not a true reflection of his feelings.

“The first thing I thought when you read something like that is that the fans will think I want to get away,” he said in the Manchester Evening News.

“That hurt, because I care more about what the fans think than what anybody else thinks.

“I think the fans understand that I just want to play. When I play I try to give 100% every time and I think that comes across in the way that I play.

“I said something in a moment of frustration and things can get blown out of proportion.

“I am happy here. I love playing football more than anything and I’d love to play in every game, but it would be wrong to think I want to leave. I don’t.

“My future is here long-term, without a doubt. I’ve only been here eight months but my career has already changed for the better. It would be stupid of me to want to leave.”