Adebayor Could Be Slapped With A Six Match Ban 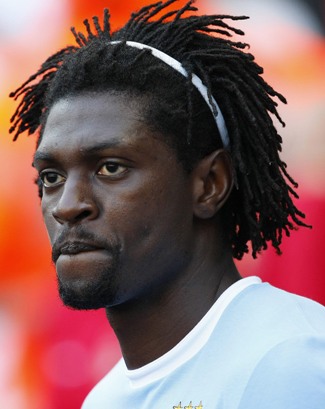 Manchester City striker Emmanuel Adebayor goaded Arsenal fans again last night by saying that he cannot wait to see them at the Emirates.

It is reported that the FA are ready to throw the book at Adebayor for his hair-brained antics in Manchester City’s 4-2 win over his old club Arsenal.

However Adebayor insisted that he is not scared of facing the fans when the teams clash again on April 24 next year and said that he “can go and play at the Emirates for the return game and why not?” He added that he plays for Manchester City and if the manager wants him to go and play, he will play.

Van Persie was left with a cut on his cheek after his clash with Adebayor and issued a statement branding the Togo hitman “mindless and malicious”.

Adebayor said that he apologised to Van Persie after the game but Van Persie did not even want to speak to him.

Adebayor, who joined City for £25million, is likely to face separate improper conduct charges and faces a SIX-MATCH ban.