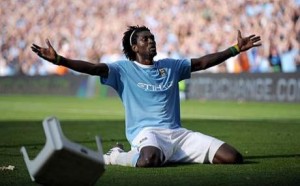 Manchester City striker Emmanuel Adebayor has said that he will continue to show “emotion” when he celebrates goals despite facing an FA charge for improper conduct.

The Togo international striker has until Wednesday to appeal the charge which was levelled at him for celebrating in front of fans of former club Arsenal after scoring for City as they won 4-2 at the City of Manchester Stadium.

Adebayor said that he is not afraid and that he will still celebrate with emotion.

He also added that if emotion was taken out of football, there will be a very big problem.

The striker also said that games will be emotional for the fans and the players, and when emotion is taken out, the people will no longer care for the game.

The former Arsenal striker also added that it is just one of those things that happens in football when emotions are high and when fans abuse a player for the whole game it will definitely effect him.

He added that people are saying 10 seconds like it is a long time but it is not and that the whole of that 10 seconds that he was running, he ran on pure emotion and that he was not thinking like he would normally do.

Adebayor claims he did nothing to provoke the abuse from the Arsenal fans.

Adebayor said that he was disappointed because he very much enjoyed his time at Arsenal. He also said that an offer came in for him and the club decided to accept it and that he did not make any trouble and did not say anything in the papers to try and get himself a move.

He does not believe the Arsenal fans will cause trouble during the return match at Emirates Stadium on April 24.

Adebayor went on to say that he has already said that he is ready for the return game and that he does not think there will be trouble, as it is a long time away and people have a lot of time to calm down.