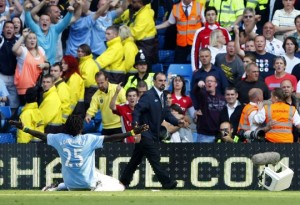 Manchester City striker Emmanuel Adebayor has escaped a further ban for his goal celebrations against former club Arsenal.
However the Togolese international striker has been handed a £25,000 fine and a suspended two-match ban by an FA disciplinary panel for improper conduct.

The FA said that in reaching its decision the Commission took into account Adebayor’s admission of the charge, public apology and the extremely provocative nature of the abuse Adebayor received.

It was also added that the Commission also stated that players have a responsibility to conduct themselves in a proper manner and that such celebrations are unacceptable and have the potential to cause a serious public order incident.

Adebayor was charged for running the full length of the pitch to celebrate in front of Arsenal fans after scoring in the 4-2 win at the City of Manchester Stadium on September 12.

Adebayor has just finished serving a three-match ban for violent conduct during the same match for raking his studs across the face of ex-team-mate Robin van Persie.

The suspended ban makes Adebayor available for City’s next match, away to Aston Villa on Monday