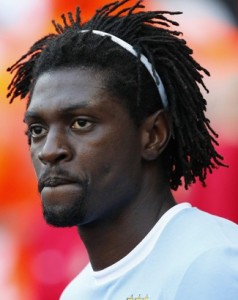 Manchester City striker Emmanuel Adebayor ripped into Arsenal after copping a three-match ban for his stamp on Robin van Persie.

In a frank interview, the Manchester City said that there is only so much abuse a man can take until he reaches breaking point.

Adebayor lifted the lid on his treatment by the Gunners and their fans that led to his outrageous behaviour in Saturday’s 4-2 win.

Adebayor also said that Arsenal players refused to shake his hand before the game.

The Todo international striker also said that he suffered 60 minutes of non-stop abuse from away fans before he turned the tables on them with his goal.

Adebayor also said that his £25million summer move from Arsenal was completed by Arsene Wenger behind his back.

Adebayor, banned for Sunday’s Manchester derby, said also went on to say that he could not understand some of the Arsenal players being disrespectful towards him.

He added that he was being abused by people who six months ago were singing his name and that the abuse was for no reason.

Adebayor also said that it was not his fault that he left and that it was Wenger who wanted to accept the offer for me.