Afonso Alves On The Verge Of Joining Benfica 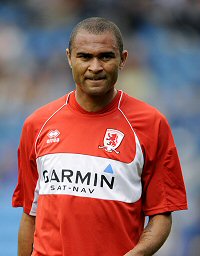 Interesting transfer news are out and it has been reported that Portuguese giants Benfica are ready to complete the signing of Middlesbrough’s Brazilian striker Afonso Alves, after he failed to impress in England.

Following Boro’s relegation last term, Gareth Southgate has been on the lookout for offers but has been holding out for the right deal and reports this week had suggested that the 28-year-old could be on his way to Porto, but that proposal has been dashed by the player’s agent.

The player’s agent Roberto Tiburcio said that joining Porto is impossible, however he has received three offers for the player, but the decision depends on Middlesbrough.

The agent added that one of the offers is from France, another from Qatar, and the last one from a big European club, one of the G14; but definitely not Porto.

He also went on to sat that he hopes that the future of Afonso will be resolved quickly and that the player is currently calm and recuperating.

He added that as for now, he is a Middlesbrough player, and has already played a friendly game and scored two goals in 45 minutes.

However it is believed that Benfica appear to have satisfied Boro’s requirements, with a transfer set to be pushed through over the next few days.