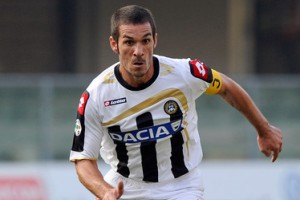 The agent of Udinese midfielder Gaetano D’Agostino has revealed that clubs are queuing for the Italian international.

The 27 year-old midfielder is currently recovering from injury.

The player’s agent Franco Zavaglia told reporters that Gaetano now has to think about getting better and that the future will be decided later.

The agent also revealed that there are at least three teams that want the midfielder.

However Zavaglia declined to give details and said that it is premature to go into details.