Reports are out claiming that the agent of Bayern Munich midfielder Toni Kroos denies a deal has been agreed with Real Madrid. 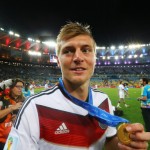 The German international star announced he was joining Real Madrid after winning the World Cup on Sunday.

However Volker Struth insisted last night: “It has not yet been decided where Kroos’s future lies, I can assure you.”

Bayern spokesman Markus Hörwick also commented yesterday there would be no word on the matter from the Bavarian outfit until the club receives official word from Kroos or his agent.

Bastian Schweinsteiger Given The Green Light To Face Italy