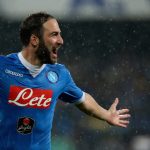 Reports are out claiming that agent Jose Alberti says Napoli face a major battle to keep hold of Gonzalo Higuain.

Higuain has been linked with a move to Old Trafford with Jose Mourinho searching for a striker to return the goals to the Theatre of Dreams next season.

“As a Napoli fan I hope Higuain remains because the Blues could win the championship with him,” Alberti told CalcioMercatoWeb.

“PSG and Manchester United have a lot of money and with the offers made by these teams we should make him a statue if it decides to stay in Naples.

“The team of Maurizio Sarri next year will have to at least try to confirm second place although I think all the rest of Serie A will also reinforce.”