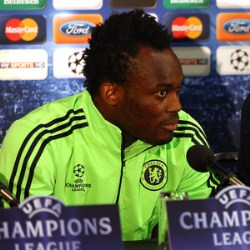 Michael Essien’s agent Fabien Piveteau has declared that the Chelsea midfielder has no intention of being reunited with Jose Mourinho at Real Madrid.

The 28 year old Ghana international has been linked with a move away from Stamford Bridge in recent weeks, with a move to the Bernabeu said to be on the cards.

However Piveteau insists that his client is happy at the Premier League club.

Piveteau was quoted as saying in the Sun: “He regularly has Jose Mourinho on the phone because they know each other well and have got on with each other since Jose was in charge of Chelsea.

“But Real Madrid has never really appealed to him. Michael will stay at Chelsea, where he has another four years left on his contract.

“He’s very happy there, in a great city and a very good club which comes up against very good teams week in, week out.”