Reports are out claiming that the agent of Napoli captain Marek Hamsik has revealed major Chinese offers. 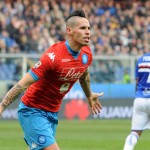 However, Juraj Venglos says such a move was never considered.

“I can confirm we received massive offers from China for Marek, but we didn’t even take them into consideration,” agent Venglos told Slovak Radio.

“Hamsik is very famous in the Chinese market and it’s only normal their clubs offer a great deal to convince him into a transfer.

“However, Hamsik is concentrated on Napoli and wants to win the Scudetto with their jersey.”