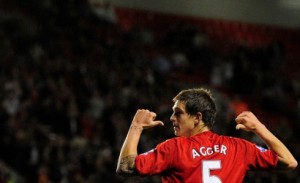 Great news for all Liverpool fans as defender Daniel Agger has moved a step closer to a first-team return.

The 24-year-old Denmark international defender who has not figured this term after back surgery in pre-season, played 68 minutes of Tuesday’s reserve game with Manchester City and he was delighted to be back in action after a frustrating spell on the sidelines.

The defender added that it is always frustrating when he is out injured and cannot play football, and that it was really great to get back out there again.

Agger also said that he knew in pre-season that his back was not right and that he had to get the problem sorted.

Agger added that he is very happy because he set himself the target to be back around this time.

The player also went on to say that he will keep working hard and do everything he can to get back in the side as soon as possible.

I Got Cocky For Third Penalty – Gerrard