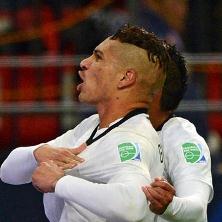 Paolo Guerrero scored what proved to be the only goal shortly before the half-hour mark but the Copa Libertadores winners found themselves firmly under the cosh for most of the remaining hour of play.

Al Ahly goalkeeper Sherif Ekramy was guilty of wasting precious time for the Egyptian champions in the second half, delaying his own inevitable substitution due to injury and disrupting his team’s rhythm as Ramy Rabia, Mohamed Aboutrika and Walid Soliman attempted to force extra-time.