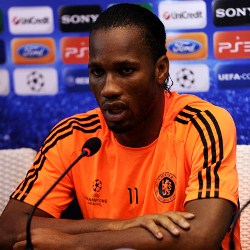 It has been revealed that Chelsea striker Didier Drogba may be plying his trade outside of Europe in the near future.

The Daily Mail revealed that the Ivory Coast international wants a net salary of £6million when he quits Stamford Bridge.

The former Marseille striker has just five months left to run on his contract, meaning he can enter discussions with clubs over a potential move.

He is attracting interest from the cash-rich Middle East and has already rejected a £4m-a-year offer from Qatari side Al Saad.

There is also interest from Chicago Fire of the MLS.