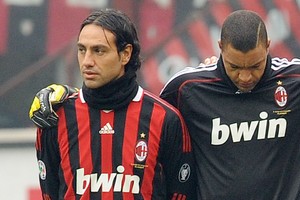 Bad news for all Italy fans as it has been revealed that AC Milan defender Alessandro Nesta’s World Cup chances could be over.

Nesta has been pondering ending his international exile for Italy’s World Cup defence this year.

However the central defender was ruled out with a knee injury for last night’s Champions League thrashing at Manchester United and coach Leonardo admitted: “I’m afraid it’s serious.”