Reports are out claiming that Arsenal striker Olivier Giroud has been named the ‘hottest player in the Premier League’. 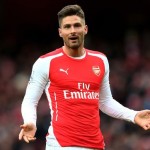 To mark Valentine’s Day, bookmakers Paddy Power surveyed a panel of 250 American women to discover the most attractive footballer.

The French international topped the list ahead of Sunderland’s Santiago and Leicester’s Matty James.

Other stars to receive a thumbs up from the females of the US included West Brom’s Ben Foster, Manchester City’s Jesus Navas and QPR’s Charlie Austin.