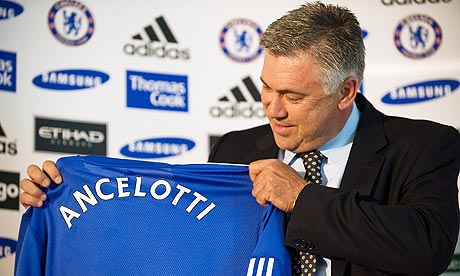 Chelsea manager Carlo Ancelotti has admitted that there was still room for improvement after his baptism in the Barclays Premier League was made all the more enjoyable by a fluke winner from Didier Drogba against Hull.

Chelsea had trailed to Stephen Hunt’s 27th-minute opener before Drogba levelled 10 minutes later with a 25-yard free-kick. But, after the Blues had squandered numerous second-half chances, Drogba’s attempted cross in the second minute of added time somehow dropped over the head Boaz Myhill for the winner.

Ancelotti said after the match that for sure the team will have to improve because the players didn’t always play well in the match.

He also admitted that the team made some mistakes but said that this is normal after one month. The Italian went on to say that Chelsea will have to improve its play and continuity in matches and that this game was very difficult because Chelsea went behind.

However Ancelotti added that the players didn’t lose the idea to play and at the end his team deserved to win and he added that it is good for the team to believe all the time that they could score.

The manager then ended by saying that this is football, a nice part of football and it is important for the players to believe.


Esteban Cambiasso Out With Knee Injury