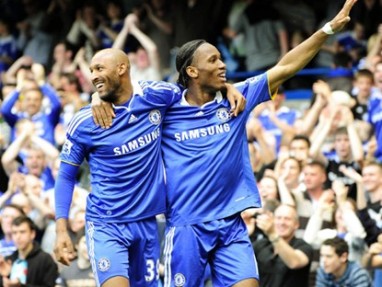 The Italian manager saw his new strikers extend their perfect start to the Premier League campaign with a 2-0 victory at Fulham on Sunday, sealed by a goal in each half from Drogba and Anelka.

The pair have not always had a successful partnership during their time together at Stamford Bridge but former Ancelotti has changed the Chelsea system, converting his midfield into a diamond formation and challenging Drogba and Anelka to dovetail neatly up front and the results have been spectacular.

Both Drogba and Anelka were exceptional at Craven Cottage, with each player setting up the other’s goal, and Ancelotti has now challenged them to maintain their electric start to the new campaign.