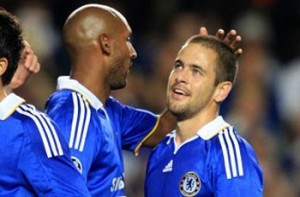 Chelsea manager Carlo Ancelotti has reportedly laid down the law on stars Joe Cole and Nicolas Anelka, by telling the pair that they must stay at Chelsea.

It is believed that the Blues boss is desperate to tie down his stars to beat the club’s transfer ban.

Didier Drogba, Ashley Cole, and John Terry have all signed new long-terms deals since the summer and Ancelotti has warned the duo that they must sort out new deals to stay at Stamford Bridge.

The Italian added that he does not speak to the players about their contracts.

However he said that for him, Joe Cole is a very good player and that he has to stay in the club and so does French striker Nicolas Anelka.