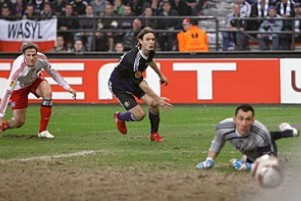 A goal 15 minutes from time from Mladen Petric sealed Hamburg’s place in the last eight of the Europa League after a thrilling clash with Anderlecht.

The Germans had appeared to be cruising through with the game goalless approaching half-time, before it sprang to life with three goals in as many minutes.

Jerome Boateng put Hamburg 4-1 ahead in the tie in the 42nd minute but Romelu Lukaku headed home to pull one back and Matias Suarez then converted an injury-time penalty.

Marcell Jansen restored Hamburg’s two-goal aggregate lead but Anderlecht responded through Lucas Biglia before Mbark Boussoufa, back from a knee injury, made it 5-5 on aggregate.

However, Petric struck on 75 minutes to break the home side’s resistance.