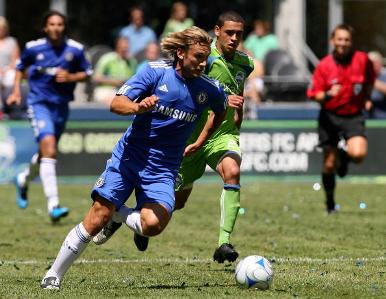 Chelsea manager Carlo Ancelotti has revealed that striker Andriy Shevchenko still has a future at Stamford Bridge despite playing just one game in the last 15 months for the Blues.

The Ukraine striker spent last season on loan under Ancelotti at AC Milan and the Italian coach clearly believes he can get the best out of him in England.

Shevchenko’s latest appearance came when he replaced Portuguese midfielder Deco in the second half of their 3-1 victory over Sunderland on Tuesday night.

It was the forward’s first appearance in a Chelsea shirt since he scored against Bolton in May 2008.

Shevchenko failed to settle in England and departed for AC Milan when former boss Luiz Felipe Scolari took charge and now the frontman will be 33 years old at the end of this month but Ancelotti insists he could have a real part to play in their season.