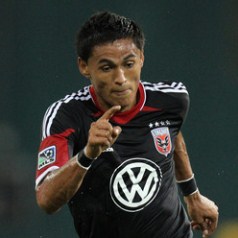 Reports are out claiming that DC United youngster Andy Najar will begin training with Anderlecht.

The 19-year old Honduras international will train with the Brussels club but it is unsure if he is simply there for an experience or to win a loan deal until the end of the current European season.

A Belgian newspaper suggests that Anderlecht, the home of USA international Sacha Kljestan, are pondering making a loan offer to Najar who trained with Tottenham in November 2011.

The 5ft 7in winger, who is a DC homegrown player, failed to score a goal during the 2012 MLS season but was impressive upon switching to full-back in the latter stages.