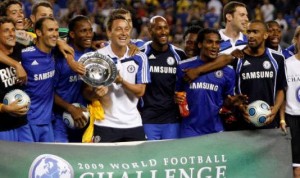 French international striker Nicolas Anelka has revealed that he has finally found happiness.

Chelsea star Nicolas Anelka has taken in Arsenal, Real Madrid, Liverpool, Manchester City and Bolton in a career which saw him labelled one of the world’s moodiest players.

But Frenchman Anelka, now age 30, who joined the Blues in January last year, said that this is the first time he has felt completely happy at a club and that Chelsea is the first football club he can call home.

He also said that he has got no plans to move again and that the players are his good friends and that he has a great relationship with the fans.

He also said that it took a long time for him to find a club that he can call home and he has finally found it.

Anelka added that it will make a player play his best when he feels at home and really feel wanted and respected.

He also said that he is playing the best football he ever has and he strongly believes that it is because he is happy.

Chelsea can hit back after defeat at Wigan by beating Apoel Nicosia on Wednesday and Anelka added that he is very confident that his partnership with Didier Drogba will fire Chelsea to European and Premier glory.