Angel Di Maria : I Was Suppose To Join Arsenal 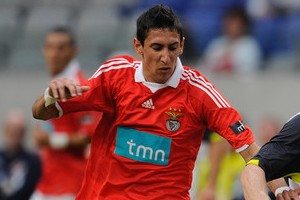 Interesting news are out and it has been reported that Benfica winger Angel Di Maria has revealed that he does not know what happened to a proposed deal to join Arsenal back in 2007.

At the time, the Argentine was with Rosario Central in his homeland but eventually signed with Portugal’s Benfica and although he is happy now, he said he was hoping to join the Gunners at the time.

The striker told reporters that : “I don’t know exactly what happened with my proposed transfer to Arsenal,”

“I was very excited about joining them but it never happened.

“From what I’ve been told, the transfer money that was supposed to appear, never appeared.

“And just a day-and-a-half later, Benfica heard about the problem, showed interest in me and quickly hired me.

“But I am sure that Arsene Wenger would have had a lot to teach me.”