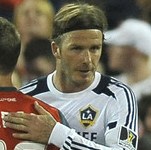 LA Galaxy come back from two goals down to force a 2-2 draw with Toronto FC on Wednesday night.

Toronto FC took a 2-0 lead through Luis Silva and Ryan Johnson but the Galaxy responded through Mike Magee and Landon Donovan who grabbed an 89th minute leveler to put them in a strong position ahead of the return leg at The Home Depot Center on March 14.

David Beckham however didn’t have a good outing as he received constant abuse from the fans.