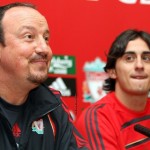 Good news for all Liverpool fans as new signing Alberto Aquilani is set to make his long-awaited Liverpool debut next month.

Liverpool paid Italian side AS Roma £20million for the services of the Italian midfielder in the summer and he has been recuperating after ankle surgery.

Liverpool manager Rafa Benitez told reporters recently that the condition of Alberto Aquilani has improved as of late and that he has has progressed well and that he might be in training in two to three weeks time.

However, the match against the leaders Chelsea on the 4th will probably come too early for Aquilani.