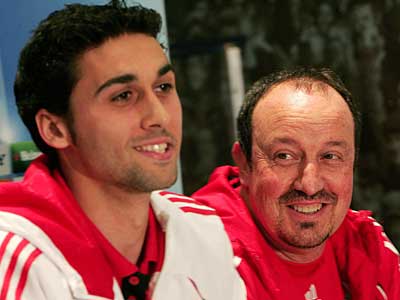 Real Madrid has confirmed that Liverpool and Spanish international defender Alvaro Arbeloa has passed his medical with the Spanish giants.

It was reported that Arbeloa successfully completed various medical tests at the Hospital Sanitas La Moraleja in the Spanish capital on Wednesday as the 26-year-old defender puts the finishing touches on his £3.5million move from Liverpool.

Madrid`s medical chief Carlos Diez told his club`s website that Arbeloa has undergone a standard examination and the results of all the tests are very satisfactory.

It is believed that Arbeloa is excited to be able to play for Real Madrid, which has been his lifelong dream and the player now is looking forward to be joining his team-mates.

After leaving the hospital, Arbeloa travelled to the club`s Bernabeu stadium to sign his five-year contract with Madrid.

The Spain international, who was part of last summer`s successful Euro 2008-winning squad, was on Madrid`s books as a youngster before moving to Deportivo La Coruna in 2006, and then onto Liverpool six months later.