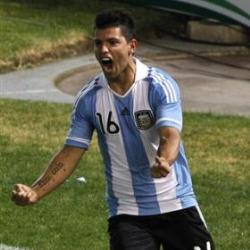 Lionel Messi was at his brilliant best as Argentina coasted into the last eight of the Copa America with a 3-0 win over Group A rivals Costa Rica.

Sergio Aguero scored twice with Angel Di Maria also on target, but it was the performance of Messi that had the home fans drooling after a couple of indifferent performances in the opening two games of the tournament.

The Barcelona playmaker threaded a beautiful ball into the path of Aguero for the second goal on 52 minutes before doing likewise for Angel Di Maria to thump home the third on 64 minutes.

Argentina could have had more than three goals as they overwhelmed a young Costa Rican side.

They had to wait until the first minute of time added on in the first half when Aguero struck after goalkeeper Leonel Moreira had failed to hold Fernando Gago’s deflected drive.

But they never looked back from that moment. Their reward is a quarer-final match with Uruguay, Chile or Peru on Saturday.