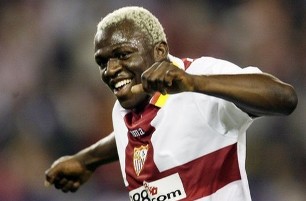 Sevilla striker Arouna Kone has revealed that he is determined to quit the Spanish club in January.

The Ivory Coast international striker is fully fit, but still is being frozen out by coach Manolo Jimenez.

Spanish newspapers have reported that Kone realises that he has little chance of changing Jimenez’s opinion and instead will seek a move away during the winter market.

Kone arrived to Sevilla in a €13 million transfer, but injury and dip in form has prevented him from living up to his expensive price-tag.

Roberto Carlos Gets Kiss To Heal The Pain – Video