Reports are out claiming that Arsenal attacker Lukas Podolski remains hopeful of returning to FC Koln. 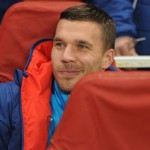 Podolski has spoken with Koln about re-signing, but accepts, for the moment, they cannot afford his terms.

“I can imagine in the next few years a change to FC Köln, they’re going well and the fans are smiling,” said the Germany international.

“I still love the club and want to again hear the FC anthem.