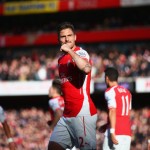 Arsenal moved back up to third in the Premier League as goals from Olivier Giroud and Tomas Rosicky saw off Everton 2-0 at the Emirates Stadium.

After a disastrous performance against Monaco, the French striker got back on the horse by finishing off a low cross at a corner near the end of the first half.

Though Everton looked somewhat tired after their midweek Europa League exploits, David Ospina had to be in good form to fend off some good chances in the second half.

But Arsenal’s holding-out paid off when Rosicky scored via a slight deflection from Phil Jagielka shortly before the end of normal time.