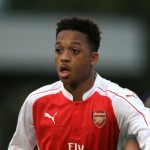 Reports are out claiming that Arsenal boss Arsene Wenger says Chris Willock has a big chance in the game.

The 18-year-old has impressed at youth level this season and, as well as training regularly with the first team, has been included in Wenger’s squad for two FA Cup ties.

“Chris is a very gifted player with natural strength and natural talent,” Wenger told the Arsenal matchday programme. “He has what you do not find very easily.

“He can have a go at people, can get past people in one on ones. We forget sometimes that the basis of team sport is to first be strong one against one and Chris has that quality.

“I believe that he has the needed character when he has his back to the wall to always respond in a very strong way. That’s a very important quality, to be able to play under pressure.

“Overall I would be very comfortable to play him now but of course there is a lot of competition for places because there are players like Walcott, Alexis and Welbeck in front of him at the moment.

“If I had to play him then I would have no fear in doing so. Next season I think he will be a player who will get to feature in the team.”