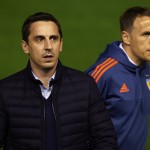 It has been revealed that Arsenal boss Arsene Wenger has taken aim at Valencia coach Gary Neville.

Former England and Manchester United right-back Neville has taken plenty of shots at Wenger and his Gunners prior to quitting his job as a Sky pundit to embark on a coaching career in La Liga.

Wenger, who was a lower league player in France and started his coaching career as an assistant with AS Cannes in Ligue 2, said: “Most of the time the reputation of big players gets you a big club early.

“You do not start at Fleetwood. When you are Pep Guardiola, you start straight at Barcelona.

“When you are not a big name, you have first to battle. That is a disadvantage because you do not start as high. But, on the other hand, you learn your job.”