It has been reported that Mikel Arteta has urged Arsenal to swiftly bounce back from the midweek disappointment in Europe. 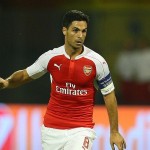 The Gunners were beaten 2-1 by Dinamo Zagreb in their opening Champions League group stage match on Wednesday night and have been ordered by club captain Arteta to recover quickly when they return to Premier League action this weekend.

Arsenal make the short trip to Stamford Bridge to take on reigning champions Chelsea and the Spanish midfielder is imploring a much-improved showing against Jose Mourinho’s Blues who returned to form with a 4-0 win over Maccabi Tel Aviv on the same night as the North Londoners failed in Croatia.

“We’re upset and we have to react,” said Arteta.

“Sometimes, when you have disappointment in the body, it’s good because you find a good reaction. First, we have to recover the best we can and start to prepare for the game, because we have only 48 hours.

“We have to be positive and take good things into the next game, because we can beat Chelsea.”

Arsenal, who sit fourth, are on the back of a four-game unbeaten run in the league while Chelsea sit 17th having saluted just once in their opening four domestic fixtures.