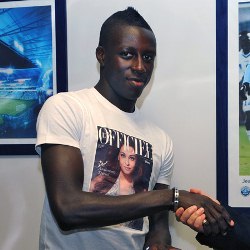 Reports have emerged that Arsene Wenger is increasing scouting missions on the 17-year-old Frenchman dubbed “the new Patrice Evra”.

Youth international Benjamin Mendy has been a revelation for Le Havre and is being monitored by a number of clubs, including Valencia and Bayern Munich.

Mendy is under contract until 2016 – but a release clause can be activated at around £3.5m.


Mario Balotelli : I Think I Can Win The Ballon d’Or!